Repeat until perfect that basically what we know is a solid way to get things right. Arnold Schwarzenegger used this throughout his career as, bodybuilder, actor, and Governor; musicians too know how important it is to repeat. So this year I have broken away from my ‘never repeat’ motto to try again.

This year then has been the Santa Pola Triathlon Cross that I did back in 2012, it’s a great race, at the start of June, perfect swim conditions 1000m in the Med, at 22º. Plus a 19km mtb ride over some fast cross country then a coastal 5km run to finish. This is actually the biggest Tri-cros in Spain right now with over a thousand inscriptions.  A big event for women too over 120 and very well organised.

ON with the race, good things about repeating an event is you know where to go and what to expect, bit like doing your driving test for the second time. So relaxed and confident it was time to see where I had improved. Working on my open water swim has been my big focus in the last year and I was pleased to see that it paid off, I got my line right, did some drafting and spotted the markers without interrupting the flow (thank you Brian) also managed to stay in the main pack with a few elbow and feet blows but nothing that put me off my objective. Two minutes quicker, which is huge in swimming, and I came out of the water sprinting to the bike not gasping and wobbling. Transitions were also a minute faster both T1 and T2.

The  bike, I was on a different bike (26″ wheel same as 2012) but my training over the last year has been long 3 hour rides in high mountain with an average speed between  10-12km/h, but this was a fast 19km circuit, my average was up to 22km/h which compared to my normal rides was fast but actually this was my slowest component. If we look at 2012 I was averaging 24km/h. Lesson from this is if we want to get better results we have to train the area in question. I had done very little intensity training on the bike so though I did ok with my base fitness the muscles needed for this race didn’t get the same training focus as the swim.

There is a nice take away from this, we all know that if we focus on something we will improve, and our bodies are no different but we must have that vision and drive to achieve it. Just working out for the sake of it won’t see much improvement do it with a goal in mind and get a lot more.

The run, as I opted for flat pedals on the bike I saved time in the second transition and didn’t have to change shoes and got straight into my run taking the first km to get the calves working and tipping water on my head as the temp was now up to 30ºc many people were trotting as I started to pick up the pace keeping to the shade where possible but the last 2km are directly next to the beach and that is where the sun was at full power. Luckily two locals that have houses on the beach had a water hose to cool us as we ran past, makes a big difference. I tweeted a ‘big thank you’ via Santa Pola tourist board. So as a friend of mine (Tom.F) says you have to ‘blow the doors off’ but at the finish not before it like Jonathan Brownlee. I saved my sprint for the last 50m to come in quicker on the run than 2012.

Overall I was two minutes slower but only because of the bike, but the rest of my race I was beating myself. So I am happy to accept the medal for it. 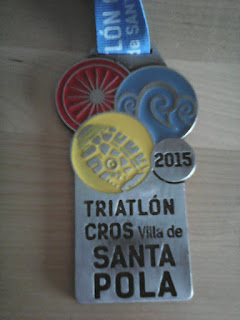